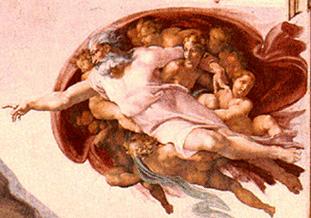 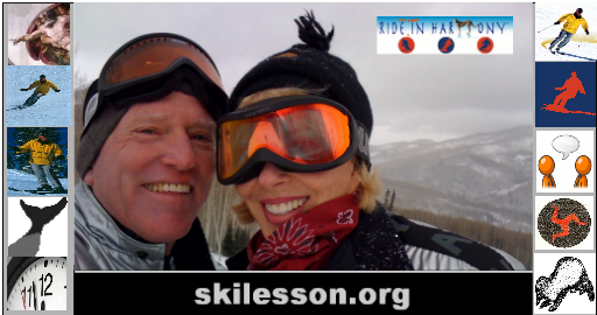 From a centered stance,  and left to the forces of gravity, the joints of the lower body will tend to mimic those of the upper body.  Upper and Lower body mimicry.

However, I’m making it sound harder to tap the benefits of the harmony within yourself than it is. Start a right turn by pointing alongside the right ski with the right index finger, in a forward direction, then do the same on the left side. Bending the elbow and rolling the wrist enough to point, is all that is necessary to start turning on easy terrain. If you’re in the moguls, think of the thumb pointing, and follow it as you move the hand forward,  with a smooth extension of the legs over the side of the bumps. As the wrist rises and rolls, the ankles roll naturally, releasing tension the edge of the skis. You are then free to cobble together the foot skills that work well for the conditions that you are skiing.

Upper and lower, and each side of the body naturally move in harmony with each other, and will effectively, when the turn is transitioned by a tilt of the hands toward a parallel relationship with the hill. From a somewhat centered stance, because a ski (or board) will tip toward the edge on the side of the higher  hand, you will turn in that direction.

Pointing is the Fundamental Movement of Athletics™, which synchronizes the bodies relationship to energy with the direction of travel. Renaissance artists, like Michelangelo, were students of athletes in motion.  It was a "new birth" of Greek and Roman art, depicting athletes from the first Olympic period, fifteen hundred years before.  Here the image of God has a dynamic twist through the body, called “contrapposto”, created as the turnside™ hand moves up and forward.

A poleswing, done well and carried through, has the same effect, and support is transferred the opposite foot.

From a centered stance, the ski will tip toward the edge of the higher hand, and you will turn in that direction.

You and the equipment are the package!

The Harmony within yourself

Oh! to be one with the mountain

Moving in the four directions

WHAT ANIMAL ARE YOU?® Inspiration

Lynx to other sites

Reinventing the Ski & Snow
Board Lesson

Know Where You Are 2

POLE TIPPING 3 -The Best
Exercise To Improve Your
Skiing

Tail Of The Dolphin 4

A Shorter Conversation (or The
Conundrum of Chatter)

Directions. Coming soon-Know
Where You Are Going

SEND US YOUR VIDEO

KAM-HOLDZTM
SKI IN HARMONYTM
RIDE THE SNOW IN HARMONY®
WHAT ANIMAL ARE YOU?®
are trademarks of Cary Thompson
© RIDE IN HARMONY TM Athletics 2001-2018
All Rights Reserved
More Legal